Hall bath can of worms

“”We are often asked, “what rooms you currently working on?” (Because everyone knows I never keep up with this blog.) Two rooms: 1) We removed a closet from the guest suite (one of two), with half-formed plans to construct a built-in bench/drawers/something-TBD in its place, and 2) I tore out the wainscoting and generally made a mess in the hall bathroom. (Oh I’m also doing a bit of work in the guest bathroom, and we’ve poked at projects in the office and the sunroom, so I guess that makes five rooms. Who’s counting?)

I don’t have great “before” photos of the bathroom—the one at top is from the real estate listing—because I [almost always] get really excited about demolition and start tearing things apart without first taking photos. (Or even consulting with Jamie. I’m a real peach.) A full bathroom overhaul is not in the budget right now, but I knew I could spruce it up and make it generally less crummy. The problems I planned to address were:

I would have also liked to replace the vanity with a minimalist floating style—to help make the room feel bigger—but unfortunately found that the floor tiles were only installed to just under the vanity’s toe kick. Since replacing the flooring wasn’t in the cards, I had to let that idea go. Ah well.

To fix the bathtub and shower tiles (i.e. make them white), we plan to hire out their re-glazing. That will make a huge difference. The new circular mirror and wall sconces have already arrived. I haven’t settled on a style, or even a finish, for a new toilet paper holder (to replace the homemade farmhouse-like one that came with the house) and towel rods but I like the Foxtrot collection from Allied Brass. We’ll purchase the new [white] toilet when we’re ready to install. And the walls and ceiling will be painted with our standard Benjamin Moore Cloud White.

Now, about that wainscoting. I started to pull it off, and—womp, womp—found wallpaper beneath. Really filthy wallpaper.

I set to work removing it. Much of it tore off easily, but for the spots held down firmly with paste, or where there was dried paste left behind, I used a homemade mixture of equal parts water and vinegar with a few squirts of lemon juice. I would spray it on just a small area and let the spray soak in for a minute, then I’d scrap away with an old card. I did this over the course of many evenings. 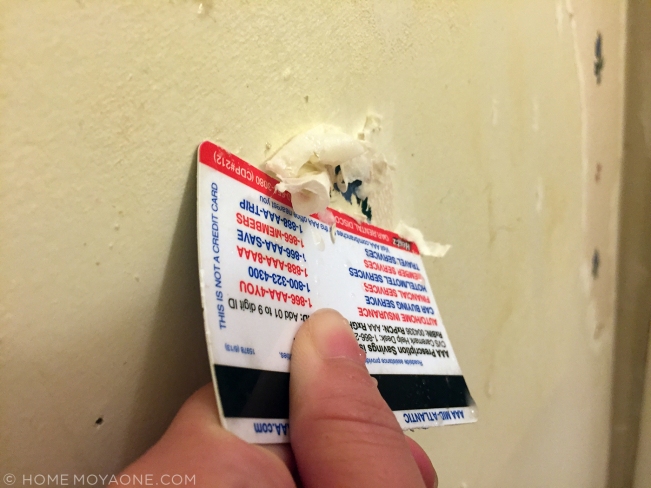 It became apparent to me, spending as much time in that bathroom as I did, that the walls above the former wainscotting had not been properly prepared for paint. Note, the painted-over wallpaper paste texture, and the bubbling, or rippling, drywall:

Unfortunately, there was a lot of bubbling, and a lot of torn drywall spots from my own wallpaper removal. I did a bit of research and learned that bubbling happens when the paper layers in drywall separate from the gypsum core. The only way to really fix the problem is to remove damaged paper layers until you reach a stable layer and then completely seal the paper. Any moisture (from drywall compound and/or paint) that comes in contact with the paper will just cause the drywall to bubble again, so sealing the damaged area properly is vital. (This blog post was particularly helpful, as was this quick tutorial.) Gardz Problem Surface Sealer is a highly recommended sealer, so I gave the entire room a coat, waited for it to dry, then hit all the torn (now sealed) areas with a thin layer of ultra-lightweight joint compound.

In some areas the bubbling returned (bad sealing job by me), so I repeated the process: again removed paper layers, brushed on Gardz, waited for the spot to dry, and applied a thin coat of the joint compound. I repeated this process where needed, until everything seemed stable and there was no sign of bubbling. I wanted to get any problems out of the way before I started a full skim coat, which is the next step needed to address the horrible paste texture and other wall irregularities…so that means, it’s time to learn how to skim coat! woohoo!

One Response to Hall bath can of worms