It’s been pretty loud here.  tap.tap.tap.tap.tap.BOOM thump….THUD……..tap.tap…  Broccoli spent the day hunkered down under my desk, as though the sky was falling.

No, puppy dog—we’re just putting on a new roof!

Plywood sheeting is being replaced: 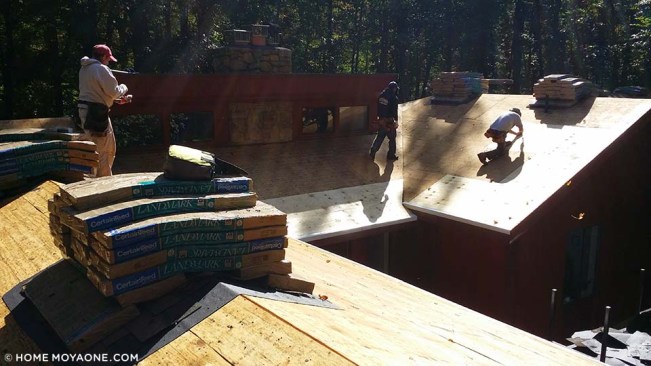 And the attic fans too:

(Also, new bathroom exhaust fan vents—previously one of the bathrooms just vented to the attic. Derr.)

And baffles are being installed in the attic:

Inside our attic-insulation-roof sandwich, the fiberglass insulation was flush against the plywood, which limited air flow between the soffit vents and the roof fans. Installing these styrofoam roof vent baffle things forces space between the insulation and the plywood, allowing for air flow (Bedtime reading about attic insulation? Here you go.) Happily, the roofing company offered to do it for us wherever they had to remove defective plywood.

Here’s a telling before-and-after picture of the peak of the roof, old shingles on the left and new on the right:

When both sides are done a ridge cap shingle will cap the peak. We chose a higher-quality shingle, 240 lb Certainteed Landmark, over the other options offered by our roofer. Each sheet of shingle is made up of layered small shingles which gives it a dimensional look. Not even taking into account the color change, the difference in appearance between the flat-o old shingles and these new dimensional shingles is a world. So excited about dimensional shingles!

Choosing the type of shingle was easy, but choosing the shingle color was harrowing (not as harrowing as choosing our gutter color, but still, a big decision). Rewind a few months:

Our roofers, Marshall Roofing, offered up addresses of houses they had roofed in the colors we were deciding between. We drove to these houses, stopped in front of them for a good 15 minutes apiece while we’d hold up a big piece of cardboard painted the color of our house, squint at the board and the house, take photos, take notes. 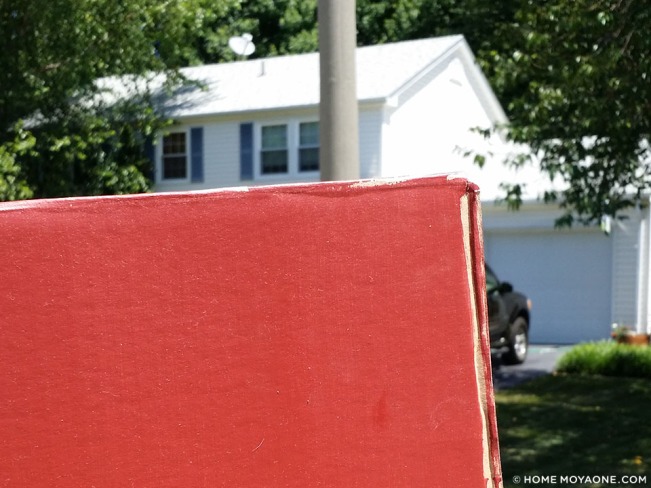 Not one person asked us what we were doing.

We’d check out a couple colors at a time, decide that neither were just right, ask Marshall for some different roof-colored houses, visit them, repeat, repeat. 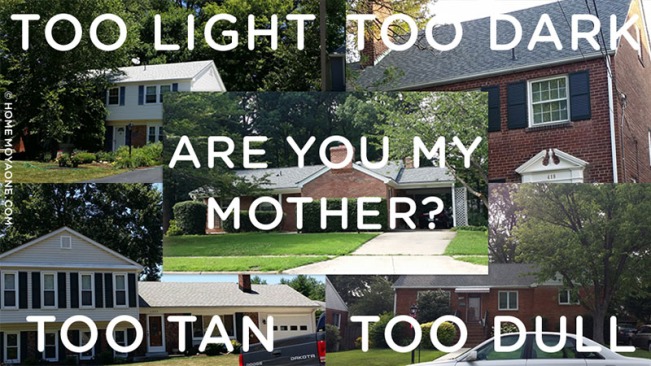 What exactly were we looking for? Our house-piration:

Which I think will look just right.