Home Tour: Mid-Century in the Woods

^ Sara’s mid-century home, tucked amongst the trees, in the Moyaone Reserve. A 1959 advertisement for the neighborhood [justly] preens, Here is great natural beauty, with river views…. It’s wonderful living just 20 minutes from D.C. line by modern highway … close enough for easy commuting yet far enough to enjoy nature’s generosity. Best of all, the Moyaone Reserve is protected by its residents, through covenants, to preserve its natural benefits.

Most of my neighbors in the Moyaone Reserve are passionately in love with this wooded community. One such person is my friend and neighbor Sara. While Jamie and I happened to stumble upon the area, find a house we liked, and move in within what seemed to be a matter of months, Sara “stalked” the neighborhood and its assorted mid-century homes for years until the right one became hers: a stunner designed and built in the 1970s by local architect Charles Wagner.

Sara loves mid-century architecture, art, and furnishings. She credits her parents—antique auction aficionados—and her penchant for watching vintage movies on TBS as a child during the ’80s for her appreciation for the modern architectural styles of the 1950s–70s. “I’ve always admired California beach movies. The cars, the outfits, the houses. I wanted that lifestyle when I grew up.”

Nearly all her furnishings were acquired through daily combings of eBay, Craigslist, Etsy, and estate sales. “Over time I’ve learned to recognize vintage items that are of good quality and have value. Old furniture is better made compared to a lot of what is manufactured today. And without eBay, Craigslist…a lot of these treasures would end up in landfills; that’s not a happy thought.”

This is Sara’s second time owning a house, so she wasn’t new to the realities of home ownership, but even so, “where we live, in the middle of the woods, you end up dealing with another realm of home issues.” Case in point: not two months after she moved in, a 60-foot branch from an old oak tree fell on a corner of the house, causing significant damage. After repairs were made, Sara was left with an appreciation for the need to keep a close watch on the nearby trees, and she continues to meet the maintenance needs of the house while filling it with vintage finds. The incident didn’t dampen her enthusiasm for her one-of-a-kind, mid-century home in the woods in the slightest. Looking out a window, she says, “we are so lucky to live here.”

^ Sara in her home’s entrance. Nearly every piece of furniture and artwork inside were found on eBay, Craigslist, or Etsy. “It means a lot that I can say that because I was raised by parents who valued old things with history and who spent a lot of time at auctions; rarely was there anything ‘new’ in our house. When I was young I didn’t have much appreciation for that, but now I do.”

^ Sara’s favorite area of her home is the open living room and dining room. The high ceilings and open space allow light from the many windows to be appreciated anywhere in the house, and during the winter she can see the Potomac River from here. Since she moved in 14 months ago, this area has been in constant flux while she experiments to find the best furniture arrangement.

^ On the wall are two Leonard Baskin lithographs: Sitting Bull on the left, and Lieutenant Colonel Custer on the right. “I didn’t know of Baskin until last year, when an eBay search for Fritz Scholder led me to him. I like the raw lines of his drawings. Each drawing gave me an immediate emotional reaction. I found Sitting Bull first, then I found Custer. The pairing of the two, facing each other, makes a powerful statement, and it’s led to some interesting conversations.” The Italian pellet stove is an eBay find that replaced a stylistically out-of-place cast iron wood stove. The red sofa is vintage Knoll, and the wool rug is from Morocco, found on eBay. 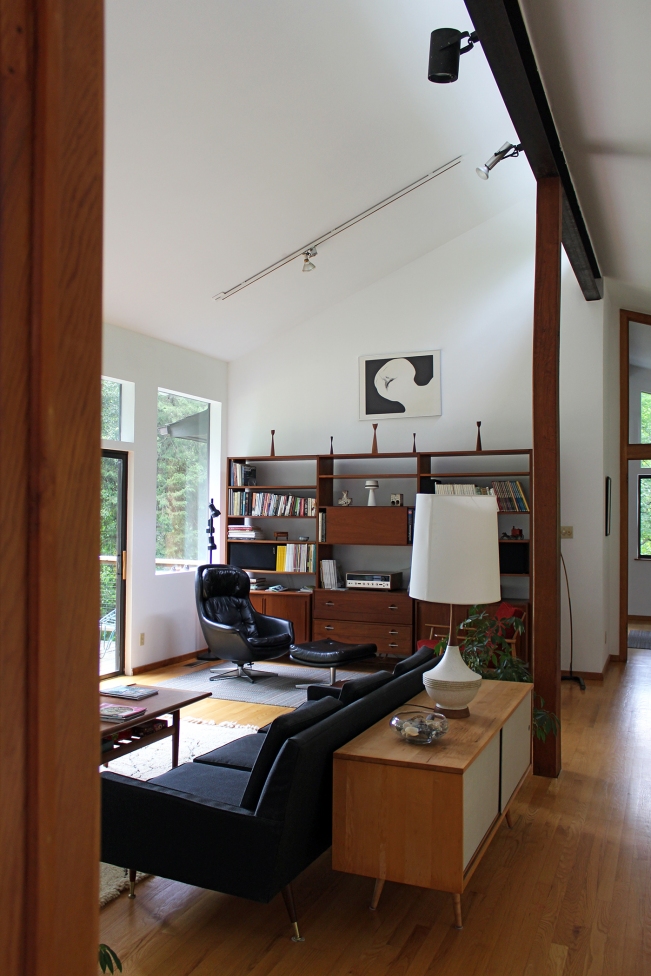 ^ A third Baskin lithograph, titled Betrayal, hangs on the opposite wall. The vertical wood beam in the center of the space isn’t original to the house, but at some point the previous owners installed it. Sara likes the way it helps to divide the space into three areas: the living room, dining room, and a sitting area. The Paul McCobb credenza and a mid-century sofa further define the living room area.

^ The vintage Danish teak wall unit has spent its entire life in the Moyaone Reserve. Before she purchased her house, Sara had her eye on a different home in the neighborhood. When the house itself didn’t work out, Sara contacted the owner about buying some furniture. The owner ended up giving Sara the wall unit, just happy that it was going to someone who would love it and care for it. “It had sat in place in that house for 50 years. It was dusty, but otherwise didn’t have a scratch on it.” The vintage Sansui tuner was a gift from a family friend. The black leather Selig lounge chair and ottoman were found on Craigslist.

^ Heart Indian, by Fritz Scholder, reproduced as a poster for the exhibition Indian/Not Indian, keeps watch over the dining room. The exhibition was at the National Museum of the American Indian in 2008, where Sara purchased the poster. Sara finds herself drawn to American Indian artwork, and appreciates indigenous peoples’ philosophies about the environment. The table is by Danish furniture designer Arne Vodder. “This is the third table I’ve had here…this one stays!”

^ On the vintage Jens Risom credenza are two pieces of ceramics that hold special meaning for Sara: a figure made by her late mother, on the left, and one made by Sara herself in high school. The painting on the wall beyond is by a woman named Laura whom Sara met during a Craigslist furniture purchase.

^ The original floor plans for the house, built in 1977. The house was one of the last designed by Charles Wagner in the Moyaone Reserve. The home’s previous (and original) owners left the plans for Sara.

^ The dining room opens into the kitchen, a work in progress. Sara removed the upper cabinets—”for short people like myself they were too impractical; I could never reach anything in the back—and they absorbed all the light!”—and plans to install wall panels with adjustable shelves from Kerf Designs of Seattle. Also on the horizon are fresh paint and hardware for the solid wood lower cabinets. In the meantime, Sara keeps the space lovely, even over patched drywall, with a reproduction of a vintage Cuban poster.

^ Beyond the kitchen is the casual seating area where Sara enjoys her weekend breakfasts. When Sara first moved in she was convinced she was going to move the kitchen into this space. The practicalities of doing so—the window sills are 32″ above the floor, too low to allow for standard kitchen counters, not to mention moving water lines—and struggles with what to do with the existing galley kitchen space, eventually convinced her to leave the kitchen where it was. “I started to think about redesign as soon as I saw this space, but then I lived in the house for awhile, and I listened to it.”

^ The panoramic view of the front yard from the breakfast area sold Sara on the house. While sitting here, just in the time we spent talking about her home, we saw a wild turkey, a deer, and a groundhog roaming the yard. Over the table is a CB2 pendant found on eBay.

^ Around the corner is an area that Sara uses as her mud entry. She plans to replace this door, and the door near the breakfast table, with full lite glass doors to bring in even more light. Originally Sara despised the tiles in the kitchen and entry—she felt constricted by the “southwestern” palette they seemed to demand, and wanted slate flooring (common in mid-century modern homes) to work with the decor she liked. While browsing through the magazine Atomic Ranch, she saw a profiled home with flooring similar to hers, and decided then to embrace it. “If those homeowners could make it work; I knew I could too.”

^ The guest room is back in fighting shape after a large tree branch fell on this part of the house nearly a year ago. The 60-foot branch punctured the roof and came through the ceiling, but fortunately caused no serious structural problems, and broke no windows. The offending tree, still proudly standing, is visible through the window. In the corner is a Fritz Hansen chair. On the bed is a Kenneth Cole linen duvet. 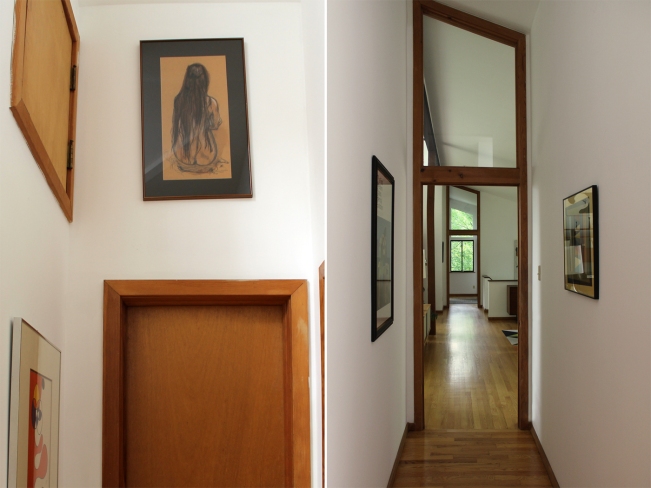 ^ Two views of the hall: Sara has such an extensive art collection (and such high ceilings) that some pieces are hung in unconventional spots, like above the door to a bathroom. Sara’s artwork was framed by Frame Savvy in Hyattsville, MD. Glass windows above the doorways gives even the hallway a sense of openness.

^ The colors in this painting, by Sara’s close friend Robert Lanzaro, are repeated in the dining room rug and the painting by the home’s entrance.

^ When asked what she loves most about her home, Sara couldn’t settle on one favorite; instead she wrote something for each day of the week. “What I love most about my home is… Monday: How I feel like I am on vacation somewhere in an earlier era the moment I pull into the driveway. / Tuesday: How the art, furnishings, and decor will make a great estate sale forty years from now. / Wednesday: That it is a unique, architect-designed home from an earlier era that complements nature. / Thursday: How the open space justifies acquisition of more mid-century art and furniture. Ha! / Friday: How it brings peace, tranquility, and inspiration to my life.”

6 Responses to Home Tour: Mid-Century in the Woods