Ferns, moss, and a new LiftMaster

On Saturday we went to the Lahr Symposium (this year’s theme: “Native Plants: Yes You Can!”) and native plant sale at the National Arboretum. It was not a bad way to spend a rainy day. The first session was a lecture about ferns by Judith Jones from Fancy Fronds Nursery in Washington. That woman loooooooves her ferns; it was great. I love ferns too, but nowhere near as much—I’m just really excited to grow them around the house. The Fancy Fronds website helpfully lets you search for ferns by plant zone but honestly I have no idea how we’re going to choose—she has 50+ ferns available for our zone alone.

Later in the day we heard a lecture about the design of the Native Plant Garden at the New York Botanical Garden. The landscape architects’ design of the woodlands area in particular fits with my “vision” for the “yard.” I put “vision” in quotes because I think that is a ridiculously pretentious thing to say. I put “yard” in quotes because we don’t really have a yard, not in the traditional sense. In any case, the woodlands at the botanical garden layered spring ephemerals, ferns and sedges, and summer and fall flowering perennials, and it is incredibly beautiful and I want my yard to look like it. Here’s hoping. The Native Plant Garden’s website is also helpful in that it lists its plants.

Here’s that vision that I mentioned, diagrammed:

[this photo has been removed]

Jamie’s vision for the property also includes drainage ditches and a pond. For clarity, and purity of my vision, those have been omitted from the diagram. Also, a fire pit and a patio are planned future projects, but that’s not for this post.

The view from the road: 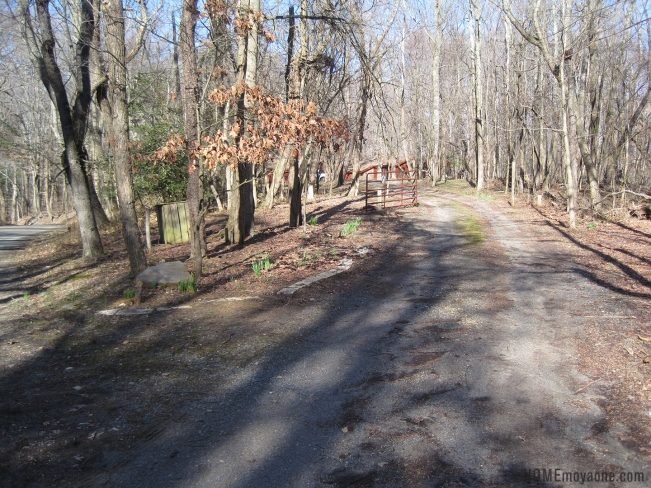 And the view from the gate: 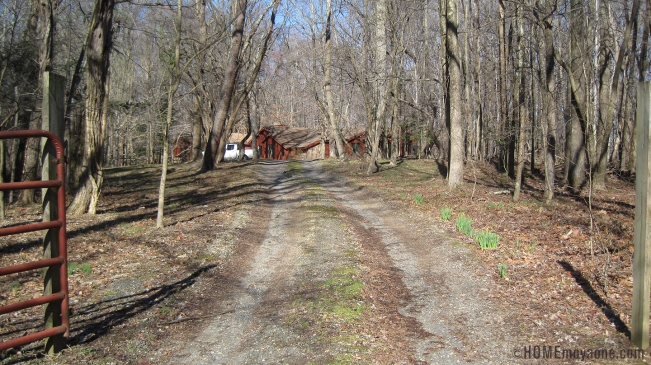 On either side of the driveway we want a moss lawn dotted with huge old trees and surrounded by ferns and other native woodland plants. The moss will be propagated from existing moss on the property; the huge old trees exist; the ferns will be planted.

We already have a lot of moss so hopefully it will spread as fast as moss can. And since spring is just creeping in it will be interesting to see what will grow from underneath all those leaves. (We have some raking to do.)

On the north side of the house is currently an enclosed area of sorts, with a collapsing fence. (Previously seen in this breach photo.) We want to create a native edibles garden there (“fruit garden” on the diagram)—properly fenced in against marauding deer of course—and so we bought a bunch of native fruit bushes at the plant sale.

We got a Serviceberry, a Black Chokeberry, an American Elderberry, a Carolina Rose, and three Spice Bushes. There they are, awaiting their future:

To round out our day we also went to a session about aquatic plantings—for Jamie’s vision—and another about renewable energy, since we’re very likely going to install solar panels on the garage roof (because it gets the best southern exposure). It was all in all an informatively enjoyable symposium.

And speaking of the garage, we had the garage door repaired yesterday! It was in a bad way. When opened it would drop 18″ (the pickup couldn’t clear it), or sometimes it would open and then immediately close on its own, or sometimes it just wouldn’t open at all. We replaced the old busted opener with a fancy new LiftMaster, adjusted the spring, and shored up one of the attachment points to the garage structure. (“We” actually refers to Sean from ABC Garage Repair in Rockville, who did a wonderful job.) Huzzah!

One Response to Ferns, moss, and a new LiftMaster