I just listed everything I need to write about to catch you up on what we’ve done around the house—and ended up with a list of 20+ topics. I’m really behind on documenting our exploits.

So I’ll just jump right back in with—MORE FRUIT TREES!

We planted the new paw paws on the North side of the house, behind the previous fruit tree planting-palooza fenced-in “orchard.” We’ve already planted the orchard as densely as possible so we had to move beyond the confines of the fence. The deer don’t bother paw paw trees so in that regard the trees are okay out there, but eventually we will move the fence out further and put in some foot paths and make our magical edible forest fantasy a reality. These things take time.

This spot had ideal paw paw growing conditions. There were a couple of large trees down so the area was getting a good amount of dappled sunlight and, most telling, it was covered with a huge existing patch of paw paws. Paw paws put up suckers with abandon (a sucker is a clone tree that grows from the base of the original tree) but they can’t self-pollinate. To bear fruit a paw paw needs to be fertilized with pollen from a different variety. And—making it pretty amazing that the tree ever bears fruit—bees aren’t really interested in paw paw flowers. Flies and beetles do the pollinating. That’s why the paw paw flower smells like a rotting carcass. (Pleasant, huh?) But back to the point: if you’re interested in gathering paw paw fruits, like Jamie is (me, less so) then a big patch of clone paw paws is basically worthless.

The pictures below shows the area after we had cleared out the paw paw sucker patch and planted our pure-bred Paw Paws. You can see one in the picture on the left: the little tree in the triangle.

Jamie had ordered the three varieties (NC-1, Allegheny, and Wabash) from Edible Landscaping, a nursery in Virginia. It would be a bit of a schlep for us to go there in person (it’s a 3 hour drive) so we ordered the plants online, but in the future we do want to make a visit. 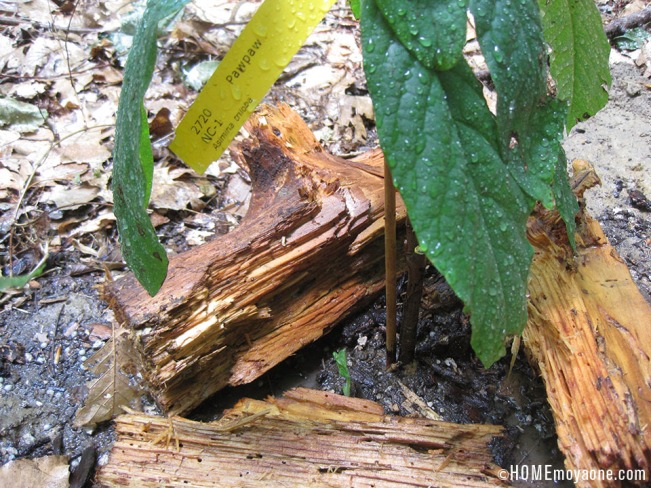 This may seem excessive to those less passionate about excessive fruit tree planting than us, but over the past two months we have bought SEVEN fig trees.

One came from a nearby apiary/permaculture farm, Azure B, where we took a beekeeping class this past weekend, and where I plan to take more beekeeping classes in preparation for bee hives next spring. That’s me in the big hat, sticking my face close to the hive:

At Azure B they grow the “Briguglio Fig” which has been passed down through generations of their family. We bought one and planted it in the front yard, along with a Brown Turkey fig, a Red Haven peach, and a Shinseiki pear bought on a whim from Ed’s Plant World up the road. Here are the four of them planted in the front yard:

We planted them where there once was a raised garden bed. We spent hours and hours—days, really—cleaning up the bed area, removing old metal posts of death and crushed plastic planters and plant ID tags—so much plastic—and leveling the ground as best we could without busting out any heavy machinery.

We then spread a layer of LeafGro compost and broadcast Spring Green Manure Mix seeds to improve the bone-dry and rock-hard ground. The premise behind green manure is that you grow leguminous plants specifically for soil improvement. Cowpeas, clover, field peas, lupins, vetch, and other similar plants supply carbon and nitrogen to the soil as they grow, and then are mulched into the soil before they mature to keep the nitrogen within the plants’ roots in the ground. (Definition paraphrased from the book Introduction to Permaculture by Bill Mollison.)

But back to the figs.

The other five trees came from the same nursery as the paw paws: two Lattarullas, two LSU Purples, and one Texas BA-1. Two of them went into pots, and the other three, one of each variety, were planted along the front of the house.

The Lattarullas have done well, both in the ground and in the pot.

The other three, however, came having outgrown their 4″ pots and so suffered the indignity of having their roots aggressively picked apart before being plopped into the ground. Totally stressed out, all three dropped all of their leaves. They’re just now beginning to bounce back and put out new leaves. 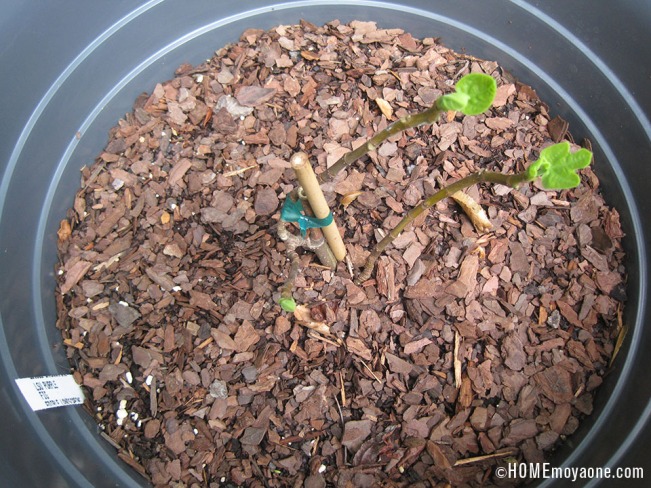 You can see the figs we planted in front of the house in the photo below—look for the yellow cages (placed to protect the trees after a contractor nearly trampled one).

For fun and posterity I’ve labeled this photo with our upcoming projects!

New roof, drainage, and grading—stay tuned! But I will explain the “ill-advised landscaping effort”—my goal was to smother the various weedy plants growing in front of the house by laying down compost, then cardboard, then more compost and mulch, then leaving them to decompose over the next year (per the instructions in the book Lawn Gone!) in order to plant something nice there in the spring.

However, I was foiled by the grading problems. Specifically that we need at least 6″ between the top of the foundation and the ground but we only have maybe 3″ in this particular spot, and we certainly don’t have the 6″ slope needed. So improving/building up soil right here is not a good idea. So project abandoned for now. So sad.

We do have a roofer and a drainage company lined up for the end of summer and hopefully we can get the grading fixed soon as well so that I can get back to planting.

For a while in the spring there were box turtles everywhere, and on two separate occasions we found one laying her eggs. One was near the driveway and the second was near the front door.

They both seemed a little irritated at the gawking.